Are you a woman on the hunt for a new bike wondering if you need to buy a women’s specific bike? Well, Cycle 360 is here to help.

Generally speaking, brands are told that women tend to be slightly shorter, have shorter torsos, longer legs, smaller hands and narrower shoulders than men. Therefore, bikes marketed as “women’s bikes” are designed to address these differences in body shapes.

Additionally, when talking about commuter bikes, women’s-specific frames tend to have a very low top tube that makes wearing a skirt more manageable, and getting on and off the bike easier.

However, the best bike for you is simply the bike that fits you and your body best, regardless of gender. Overall, a perfect fitting bike means better comfort, better performance and a better experience on the bike.

Bike brands often provide size guides for each size bike they produce, but it’s always a good idea to test ride a bike if you can. Pop into Cycle 360 if you can to test ride your bike.

The bike’s fit can also be tweaked to your exact needs. This will be partly based on height, leg length, arm length, etc.

Some things that can be changed or altered to make a bike more comfortable for a rider include:

For some of these changes, it’s just a question of moving some things around and adjusting the bike. However, other products will need to be swapped out and new products purchased, such as saddles and handlebars. 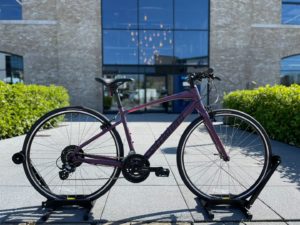 Adaptations can be made to make a bike more female-friendly

Yes! Although there are some differences between ‘male’ and ‘female’ bikes, most bikes tend to be unisex. So, there’s absolutely no reason why a man and woman can’t ride the same bike. Everybody has a different physique after all!

How do I know if a bike is unisex?

The best way to tell if a bike is unisex is to look at the crossbar. Crossbars on ‘women’s bikes’ tend to sit far lower than on men’s bikes. However, the crossbar on unisex bikes is in a neutral position. This will look like a ‘v-shape’ frame rather than a low or high frame. This design considers the anatomical differences of the female torso, and it’s still accessible for men, too.

The only real difference on a unisex bike is that the crossbar is vertical and slightly angular. Additionally, you may find less gender-specific colours and designs too, to cater to any and all tastes.

Any bike can be unisex – from mountain bikes to road bikes and everything in between. You may find that a bike made for your gender provides a better fit or the opposite may be true! It’s not uncommon for men to prefer women’s bikes and vice versa.

So, next time you’re looking for a new bike, be sure to shop around, test ride, and keep an open mind – you may be pleasantly surprised!

Cycle 360 has a huge range of unisex and women’s-specific bikes to browse, as well as women’s accessories such as saddles and clothing.

Shop our online store here or pop-in store to browse, test-ride and buy!