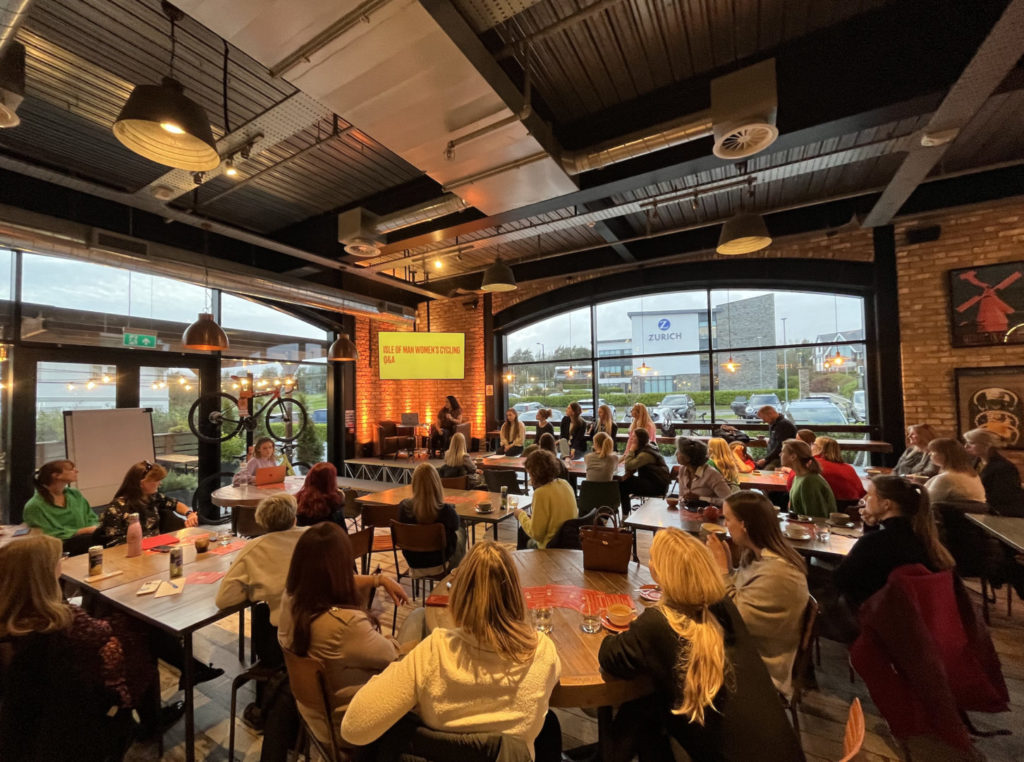 The aim of this event was to bring a range of voices together to share stories, to be inspired and to have a conversation about how we can identify solutions and take potential action to improve things collectively.

We hope everyone that attended felt inspired after hearing from such positive, proactive, determined and resilient women!

There was an overwhelming sense of community and a true feeling that many women on the Isle of Man want to be more social with riding. However, there were obvious barriers discussed.

Therefore, Cycle 360 and local female cyclists are keen to continue the conversation and to come up with solutions to the problems many female cyclists on the Island are facing. For now, we ask that women use the Isle of Man Women’s Cycling Facebook page to network, organise group rides and to post their advice for other female cyclists. We also plan to host another similar networking event in the coming months, so keep your eyes peeled!

A summary of last night’s event can be found below, including the inspiring stories of our incredible panel & guest speaker, and the general themes surrounding the barriers facing women in cycling. 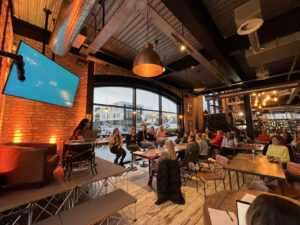 Kirree, the Manx Female National XC Champion is a self-proclaimed “latecomer” to the sport and didn’t take the sport very seriously until around 2015. She was successful in qualifying for the Gotland Games in 2017 where she achieved two fourth place finishes.

She says she would love to see more women in the sport as she feels it’s under represented by females, especially in mountain biking, which means that Kirree often competes in the UK in national championships as opposed to on-Island.

Kirree told the audience that if she could change one thing about cycling on the Isle of Man, it would definitely be to have more female representation within the sport to make competing more exciting.

Jessie, the Isle of Man National Road Cycling Champion, found her way into cycling via triathlon which is where she got her first ever road bike. However, due to recurring injuries, Jessie’s love of running diminished and she took up cycling as her main sport.

“During COVID, it was so nice to be able to ride my bike just for the fun of it, which is where I think the real bug for cycling came from”, she told the audience. After the pandemic in 2021, Jessie progressed more to UK racing and was selected for the 2022 Commonwealth Games in Birmingham.

Jessie told us how some of the people she has met through cycling have become like family to her and that a shared love of cycling forms a real community.

“There’s this mentality that if you cycle then you have to race as well but, you’ve got your sportives, Saturday coffee rides, Strava routes and so on. There’s just so much more to cycling than competing!“, she said.

A Manx triathlete whose love and skill for the sport has taken her all around the world competing, Lucy says she got into triathlons due to being in a very sporty family, saying that she either had to watch sport, or get involved… so, she chose the latter option.

When asked, “how do you fit it all in?!”, Lucy simply responded by saying “with lots of planning and lots of 5:30am starts!”

The one thing Lucy would like to change about cycling is “The assumption that women can’t do the same as men!”

“It’s 2022, women shouldn’t be the event before the main event! It’s often viewed as the women’s race, followed by the main event and that needs to change!”, she said.

Anna is a professional cyclist currently riding for Le col – Wahoo, an international women’s cycling team. She was picked up by BC as a junior, and signed her first professional contract in 2014.

She believes that so much has changed for the better since becoming a professional cyclist, but growing up she noticed that the women’s cycling was never on the TV. Therefore, she’d love to see even more coverage of women’s cycling.

On Island, Anna would love to see a solid Manx team to be formed to race in national series’, as at the moment most young Manx riders have to find their own way and join a UK race team.

A former professional golfer, Jackie took up cycling around seven years ago in a bid to get fit after having children. She told the audience that if it wasn’t for cycling in a group, then she probably wouldn’t have ever had the confidence to compete.

Jackie’s daughter, is also an incredible cyclist and has made amazing friendships through the sport.

“I’m very lucky as a mum to get to go out riding with my daughter, and I think that’s pretty special.”

Jackie also reiterated earlier frustrations about a lack of a women’s race team on the Isle of Man and how young riders have to go away to the UK to find their own team once they get to around the age of around 16. 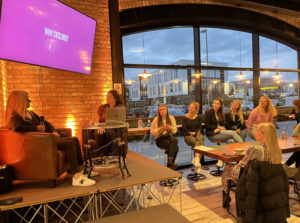 Five time British National Road Race Champion, former Olympian and Tour de France stage winner, Marie Morgan spoke of how she took up cycling in her 20s due to wanting to better herself and get fit.

What barriers did you face back then that you still feel are prominent now?

“Women’s sport in general has come on massively over the years, but when I started out there weren’t many female riders. So, I started entering men’s races!”, she said.

After receiving some very negative and often sexist comments from male riders, Marie didn’t let this defeat her and only let this spur her self-confessed ‘aggressive’ riding style on further.

She commented that “attitudes are slowly changing that women are capable! It’s been a slow process but women have found their feet.”

“Also, it’s becoming more and more clear that women can come back after they’ve had children!”

What is your advice to women starting out?

“Never be fearful! Get a comfy saddle, helmet and lights, but also, get out in a group!”

Marie ended by saying, “It’s so important that we get the network going and talk about what we can come up with as a plan to get more women out cycling!” 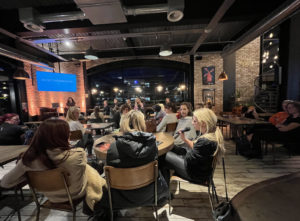 After hearing from our incredible panel and guest speakers, we then opened up the floor for a discussion on what we felt were the major barriers that female cyclists face and the below themes appeared.

Fear of the roads

“According the UK studies, the number one thing stopping women getting on their bikes is fear of the roads.”

Various audience members commented that fear of the roads and lack of knowledge about how to handle a bike whilst on the road is a major barrier. The Isle of Man is lacking in adequate infrastructure such as safe cycle lanes, and many attendees agreed that this is something that needs to change in order to encourage more people to get out on their bikes.

Many women feel nervous about going out on their bike due to a lack of knowledge on general bike maintenance. The fear of getting a puncture or their chain breaking and not being able to fix this without the help of somebody else was also found to be a major anxiety for some riders.

Cycle 360 has previously been host to bike maintenance courses to help teach riders the basics, these are something our workshop team plans to host more of this winter so we hope to help make a difference on this issue to improve people’s confidence whilst out riding.

Many felt that there also isn’t enough information on safe cycling routes around the Island. Whether that’ on or off-road routes, more should be done to provide riders with the knowledge of where to ride their bike in order to enjoy our beautiful Island.

Nobody to ride with

Our panel highlighted brilliantly how important cycling has been for creating friendships and a sense of community. However, there appears to be a lack of regular group rides or networking events for female cyclists on the Isle of Man, meaning that a community of novice riders is being potentially missed.

Hosting regular meet ups, like the Cycle 360 Coffee Club rides, and doing more events like this women’s cycling Q&A for networking, could be great starting points to facilitate this.

Women’s cycling is just as exciting and just as important as male cycling, but it doesn’t receive anywhere near the same amount of coverage. Whether that’s on the television or in the local newspapers, there was a general consensus that women’s racing doesn’t get the coverage that it deserves.

Let’s keep shouting about how incredible women’s cycling (and sport in general) is, so that we can help to give it the recognition it deserves. 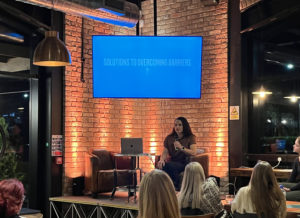 So, what are the potential solutions to these problems that were raised?

And most importantly, let’s keep talking and meeting!

All of us have the capacity to effect positive change, simply by speaking up, and one of the proactive ways this can be achieved is by supporting the brands and businesses that also care. Do your research before you buy and support smart!

For those that did attend the Q&A event, you are being encouraged to provide feedback via this form here.

Remember: small changes, yield big results. Let’s all be the role models we can be, and grow the sport together!